It is easy to associate Midtown with all the spectacle, huge flashing billboards around Times Square, Broadways tempting shows, concerts and cool sports events at Madison Square Garden and the classic Carnegie Hall; the most famous concert hall in New York, but there is so much more to discover.

Here are the most popular ones: Empire State Building and Rockefeller Center, Sixth Avenue, with architecture as from the ‘Mad-men’-era, the epic Grand Central Station, Madison Square Park with the very special wedge shaped Flatiron building,
the name ”Flatiron” derives from its resemblance to a cast-iron clothes iron.

MoMa – The Museum of Modern Art is also located in Midtown and boasts a huge collection of 150,000 artworks, 22,000 movies and four million stills.
A number of trendy rooftop bars can be found around Midtown as well as Eataly food paradise and plenty of diners, restaurants, bars and Hells Kitchen nightclubs.

When choosing to stay in Midtown, with its large offering of hotels in various price ranges, you’ll be in walking distance to many attractions with the rest of New York easily reached by subway.

My favorite hotels in Midtown

© Courtesy of MADE Hotel

Imagine a cozy nest in the city, a place to camp, to refocus, to rest and recharge. MADE Hotel’s guest rooms are intimate retreats made for rising above the city’s round-the-clock din. Discover privacy, that elusive but oh-so-essential amenity, in a place tricked out will everything you need so you can travel light. Stay up late, turn in early, alone or together: these rooms were made for you. Located in Manhattan’s Flatiron District, Freehand New York is housed in the former George Washington Hotel—once home to many storied writers, musicians and creatives. Designed by Roman and Williams and featuring custom-commissioned artwork by Bard College students and alumni throughout, we’re revitalizing the artistic community in a historic NY neighborhood. 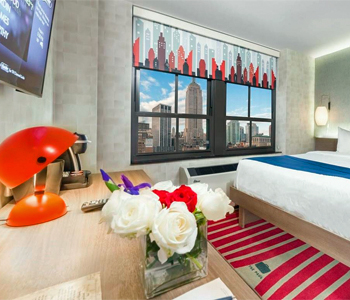 © Courtesy of The Paul

The Paul features 122 spacious, residential-style guest rooms and 3 deluxe suites with loft style multi-pane windows and views of The Empire State Building and the Freedom Tower, some rooms also feature your own private outdoor patio. 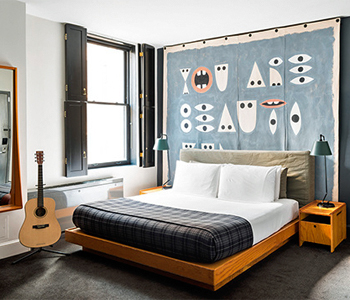 Ace Hotel lives in a historic, turn-of-the-century building in Midtown , invested with the spirit of its surroundings, the culture of the city and the ancient bones of the building. Compact, stylish rooms with vintage decor offer minibars, free Wi-Fi and flat-screen TVs. Upgraded rooms add original artwork, fridges and/or turntables; some also have sitting areas.

© Courtesy of The Roger

From its terraced suites to the NYC-centric provisions of its popular Breakfast Pantry, The Roger radiates the Old World glamour of Manhattan. A fixture on Madison Avenue, this stylish boutique hotel elevates the big city experience with cozy late-afternoon wine soirees and chic Anna Busta interiors. 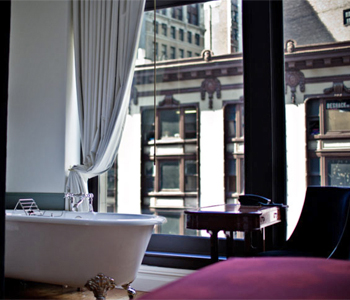 © Courtesy of The Nomad

NoMad is housed in a turn of the century Beaux-Arts building that has been fully restored to its original grandeur with interiors by French designer Jacques Garcia. The hotel is intended as a fresh take on the classic grand hotels of Europe with a distinct New York sensibility. The 168 rooms are residential in feel and decorated in his classic, timeless style. 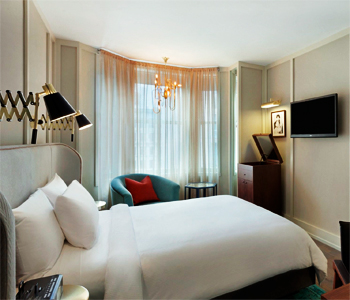 © Courtesy of The Evelyn

Gracious hospitality, a rich sense of history and exceptional service await you at The Evelyn, a historic boutique hotel in the NoMad neighborhood. Madison Square Park, the Empire State Building, and Midtown are just minutes away.  Our modern amenities and relaxed atmosphere, with accents that reference the rich heritage of the neighborhood and our landmarked building, will make you feel right at home in the heart of New York City. 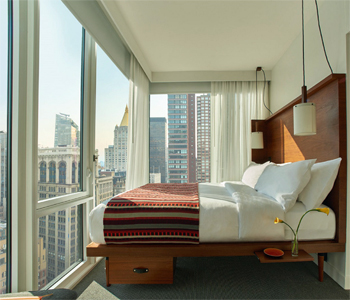 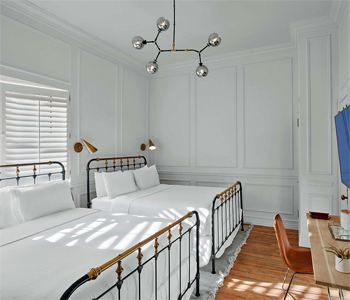 © Courtesy of The Life Hotel

Located just steps away from 5th Avenue in the heart of Midtown and the vibrant NoMad neighborhood.  Life Hotel – once the headquarters of the iconic LIFE Magazine where celebrated artists both lived and produced the publication. Our 98 guest rooms and suites pay homage to the spirit of the building’s 1894 heritage with a modern and smart twist. 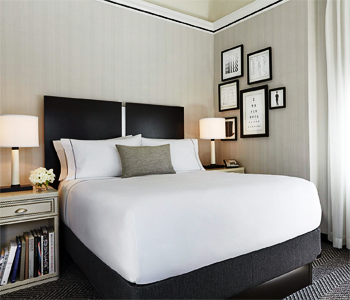 © Courtesy of The Gregory

Experience the city in impeccable style at our truly outstanding New York City boutique hotel. Just a short stroll from the acclaimed Empire State Building, The Gregory Hotel is the premier destination for any metropolitan vacation. Here, modern accommodations meet our rich, historical background to create an everlasting sense of charm. 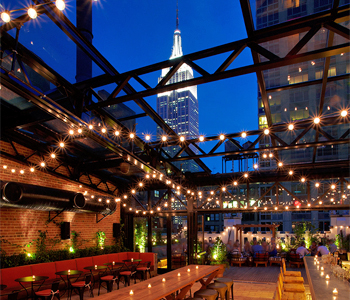 © Courtesy of The Refinery

Refinery Hotel is the imaginative reinterpretation of the Colony Arcade—a former hat factory. More than 100 years of Garment District history are on display at our luxury hotel near Bryant Park,  stylish loft rooms with soaring ceilings, the acclaimed Parker & Quinn restaurant, and our fashionable Refinery Rooftop bar. 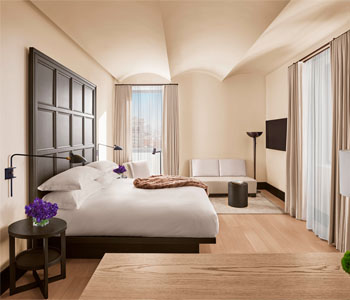 © Courtesy of The Edition

Originally constructed in 1909 as Metropolitan Life Insurance Company’s headquarters, this clocktower has been ingeniously reinvented to offer 5-star boutique accommodation, a tranquil spa, chic new event spaces and a Michelin-starred restaurant helmed by Executive Chef Jason Atherton, all encompassed by 360-degree views of the City. 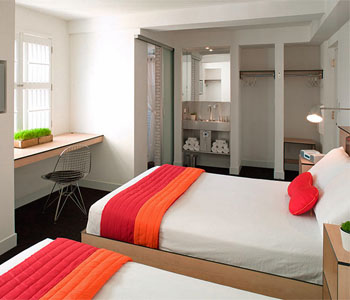 At the hotel, you’ll find comfortable, inviting spaces for relaxing or catching up with work, from our chic, comfy hotel rooms to our café, patio and courtyard, and al fresco rooftop. Step outside and it’s a few steps to three major subway lines, Fifth Avenue, Central Park, Grand Central Terminal, Rockefeller Center, and much, much more.

​Step past the landmark Northern Italian Renaissance façade to find the first of many surprises: our bright, buzzing lobby that’s all about connectivity – be it to the city, our staff, or your fellow urban nomads. The Pod Concierge Team stands ready to put you at ease and on the right track to whatever it is you’ve come to see and do.

My favorite hotels around Times Square 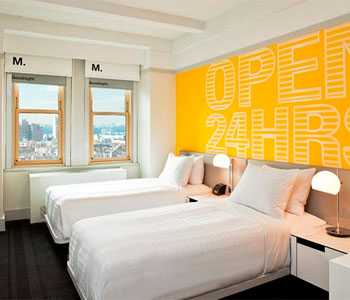 © Courtesy of The Row

Row NYC transforms your stay into a completely contemporary experience – with a front row view to Times Square that’s truly incomparable. Outside the hotel, guests have access to anything and everything Times Square has to offer – 24/7. Inside, the Row NYC is a medley of inspired New York City amenities. 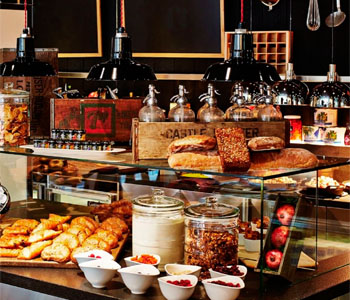 Located just off the corner of Broadway and 50th street, our New York hotel is right in the heart of Midtown Manhattan, smack bang in the middle of the Theater District, so if you’re looking for the coolest hotels New York has to offer, check out citizenM.

Surrounded by the non-stop, neon-fueled energy of Times Square and the 24-hour allure of Manhattan nightlife, Pod Times Square Hotel offers a relaxing and affordable place.  Our location on a quiet corner in Hell’s Kitchen, along with soundproof windows to drown out the sounds of the city, means you’ll forget you’re just steps from the action when you’re unwinding in your room.

Our hotel is perfectly situated in the heart of Midtown Manhattan West on West 47th Street between 6th and 7th Avenues. That means we’re less than 1/2 block from Times Square, the Theater District and Fifth Avenue, 3 to Restaurant Row, 4 from Rockefeller Center and just a bit further to the Empire State Building, Central Park and Greenwich Village

You’ll find some of New York City’s largest hotel rooms and suites, multiple restaurants – including the only revolving restaurant in the city and our new outdoor lounge  and a knowledgeable staff to help you navigate this expansive and ever-changing city. 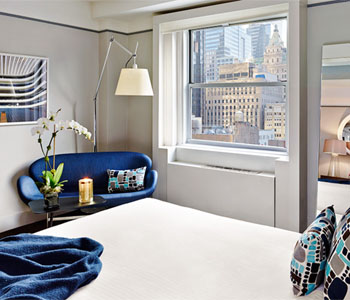 For theater fans, including plays, musicals and monologues, the Paramount’s location in New York City’s famed Theater District is incomparable. 605 room that are comfortable, neat, and updated in a contemporary style.  Guests rave about our sumptuous pillow-top mattresses, down comforters and pillows, and Egyptian cotton sheets. 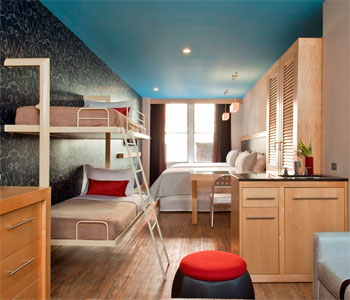 © Courtesy of Tryp By Wyndham 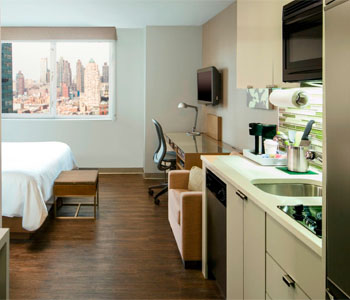 Room Mate Grace has everything that you’ve always dreamed of: a prime location right in the heart of Manhattan, next to Times Square, so you can really make the most of your time in the city. What’s more, we want you to feel like you’re staying with a friend while you enjoy the quality services, heated pool, gym, sauna, Pool Bar, and the warm hospitality that sets us apart from the rest.

At YOTEL, you will get seamless intuitive service, a buzzing atmosphere and one of the largest outdoor hotel terraces in New York City (hello cocktails) – and, of course, all of this in a super central location in Midtown Manhattan. What sets us aside from other NYC hotels is our clever design, we optimise every inch of space and create contemporary areas for co-working and socialising.

The hotel rates in New York keep changing on all the time depending on the season and the hotels occupancy rates.

That is why we don’t display any rates on this page. Click on Book and search on the dates you want to stay in New York.